Home » Uncategorized » The last of the North Carolina/Tennessee border straddle

It’s hard to believe we’ve hiked nearly 200 miles since we left Hot Springs, NC; passing our 300 and 400 mile markers in the meantime. Before we cross the 500 milestone and pass into another state on the AT, we thought it best we update our loyal followers: 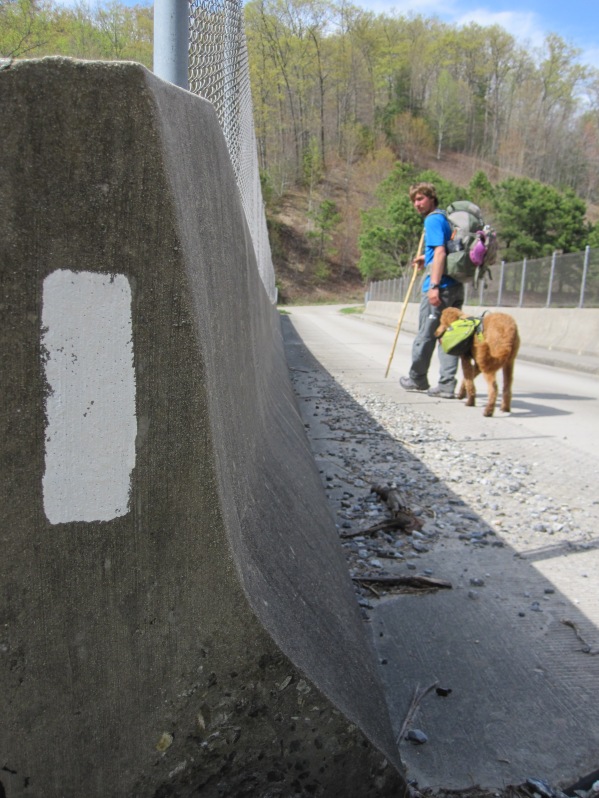 A lot of talk about a nasty virus named Noro had everyone cautiously proceeding down the trail away from Hot Springs. An influx of cases had been reported between there and Erwin, Tennessee as the bulk of northbound Thru-Hikers passed through the area. (I’ll leave out the details of what effect the virus has on a person, and save that for your own Google or WebMD searching.) But regardless, it was not something any hiker wanted to contract, and we did our best to keep our distance from shelters and other areas of high hiker traffic.

The first day back on the trail we ran into a fellow Thru-Hiker ‘Sherwin’, then set up camp near him (once we were certain he was Noro free) and enjoyed a chilly evening next to the warmth of a fire. All of us stayed up way past our hiking bedtimes exchanging stories and finally getting to know one another better after weeks of running into each other along the trail. This is quite typical, for it to take time to learn someone’s story along the trail. The AT hiking community is a respectful one for the most part when it comes to one another’s personal space. Off the trail when you meet someone for the first time you likely know their name, occupation, education level, relationship status, and so on within moments of shaking hands. Here on the trail, you can give yourself a trail name (or take the risk of receiving one from others) that protects your identity, and then head into the woods without ever needing to volunteer much more information about yourself. Our conversations with fellow hikers are dominated by talk of milage, food, water, weather, animal encounters, and gear. The dogs aren’t able to avoid any prying on the trail, almost everyone we encounter on the trail wants to know their life story. Luckily it’s a short one, and we answer that they are 14 month old Goldendoodle brothers from the same litter a dozen or more times a day!

The following days we had fair weather and the hiking came easy through scenic terrain. We camped near a babbling brooke one night and received trail magic (ice cold Coke being chilled by a spring) another day from a man named ‘Lord Willing’. He had joined his son on portions of a thru-hike the year prior, and just enjoyed supporting those of us on the same journey. It was fun to hear stories about the trail that lay ahead, in particular Maine. Remote, rugged, and the final stretch of trail that will stand between us and our finish, Mount Katahdin is something we think of often with a mix of anticipation and intimidation.

Our last full day of hiking before reaching our resupply in Erwin, TN we were drenched from afternoon showers. We watched the storm roll in with perfect panoramic views on top of Big Bald. 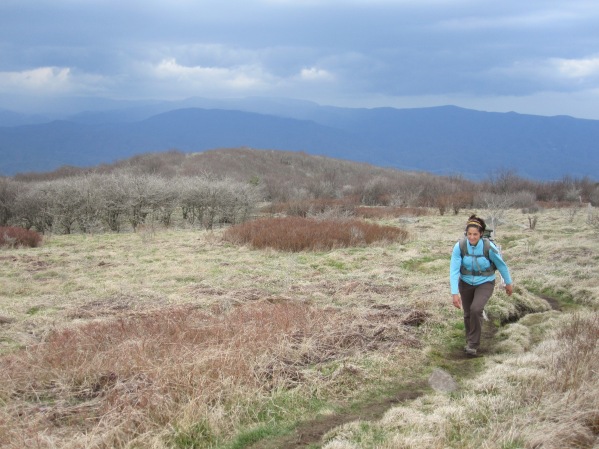 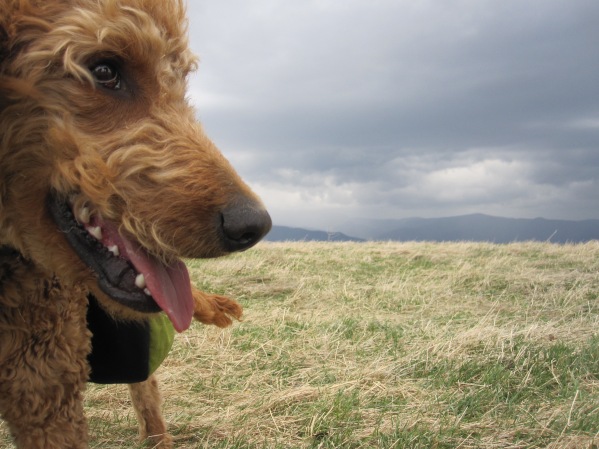 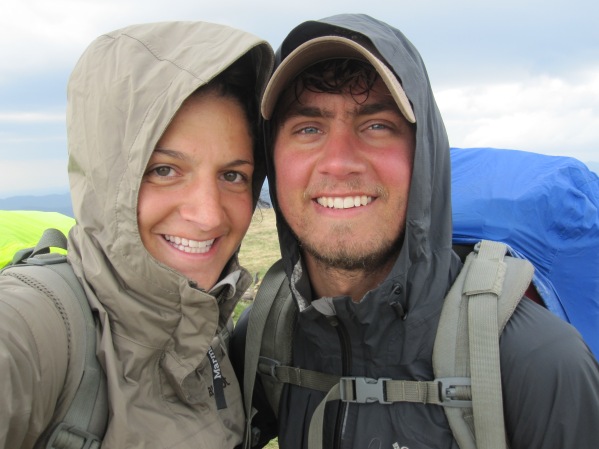 Nothing, we discovered is completely waterproof; or if it is, chances are it’s too heavy or bulky to bring along on a long distance thru-hike. When it comes to lightweight rain gear, being both waterproof and breathable is a myth created by the outdoor gear world. If our gear is succeeding at keeping us dry, our bodies are making sure to compensate until drenched in sweat inside our waterproof jackets. Luckily, we caught a break from the constant drizzle before sunset and were able to settle into our tent for the rainy night; damp but cozy in the company of two wet dogs.

The next day we descended into Erwin, TN. Wish we could say it was with ease, but the switchbacks seemed never ending and Alexis wasn’t feeling the best so we took our time reaching our destination. The plus side was wonderful weather and the views down to the Nolichucky River were spectacular. As we inched along at what was likely our slowest pace yet thoughts of Noro crept into our minds. When we reached the bottom, the Nolichucky River, we walked the couple hundred yards to Uncle Johnny’s Hostel. With prime real estate on the AT and a sign out front that reads “40 cent Snickers!” it’s tough for a hiker to pass. So, we set up our tent for the evening in the yard of the hostel and Alexis crawled in right away, hoping that a little rest would have her feeling like herself again.

It was that evening we learned the heartbreaking news that Brent’s Aunt Ruth had passed. We were thankful to be off the trail and able to quickly make arrangements for Brent to travel home to be with family. Even more so, we were thankful to be in close proximity to friends Craig & Lori, who didn’t hesitate to help us out in a hurry. From there we stayed with them a night and the next morning Brent flew home while Alexis stayed back with the pups. Despite unfortunate circumstances, it meant a lot to Brent to be with his family, if even briefly and for both of us to receive the overwhelming and gracious help from Craig & Lori, and his parents Bobby & Ellen. 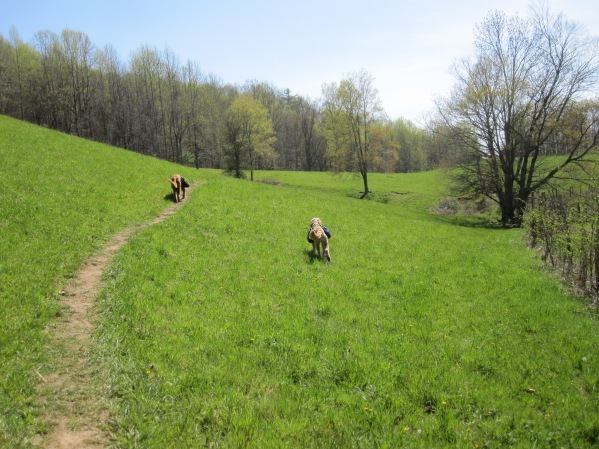 When we planned to get back on the trail we were going to pick up exactly where we left off. We consider ourselves purists; no short cutting to make up for lost time, every white blaze will be passed. 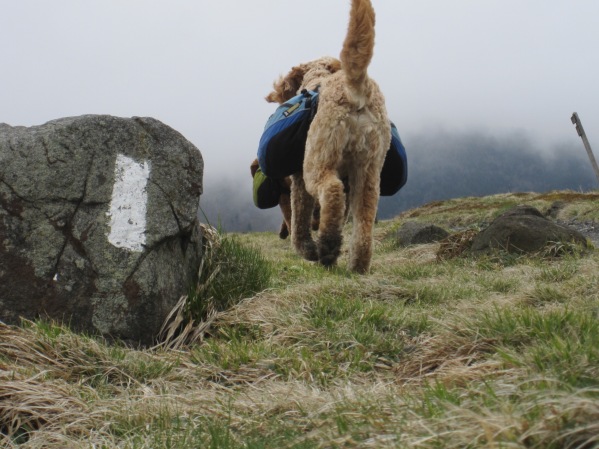 A thru-hike to us is about taking things as it comes, and making the most out of. If one were going it solo they may by able to more easily set and keep a schedule of some sort or make quick decisions without lengthy contemplation and conversation. For our thru-hike, the progress falls on the shoulders of four separate individuals, and the accountability we have to one another is monumental. We wouldn’t have it any other way though, and we took off from Erwin, TN with full packs and a refreshed perspective after time spent away from the trail amongst others who shower regularly. Day two out of Erwin, TN we passed through Unaka Mountain, a dense spruce forest that was almost eerie in the morning fog. Alexis thought it was one of most beautiful places we’ve passed through, where Brent has more of a thing for balds where he can catch views that go for miles. Both would agree that the true splendor is in the diversity; the change that comes with elevation, latitude, and season all make the experience of hiking the AT unforgettable. 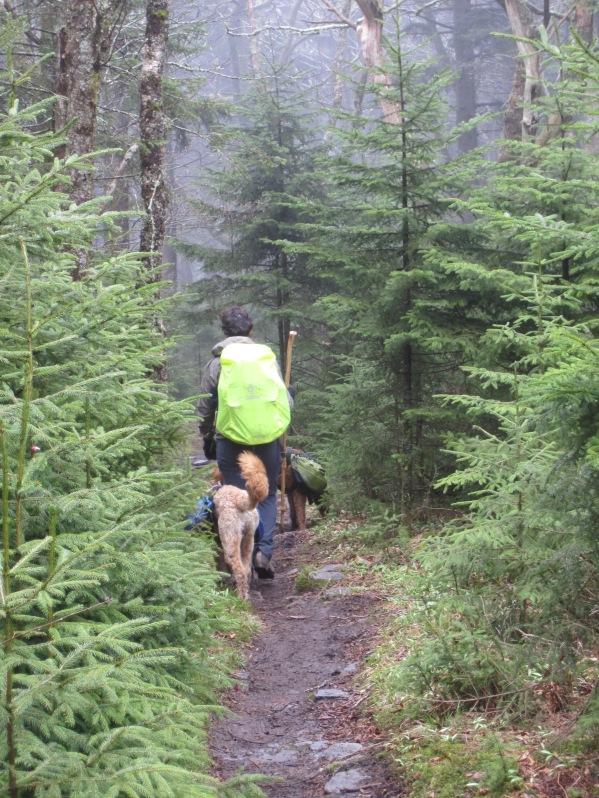 Just like in everyday life off the trail, plans can change quickly. Ours just happen to be heavily weather/mood/hunger/health dependent, and oftentimes fluctuating hourly. Some days we don’t think it’s so grand when we’re soaked and a dozen miles behind our so called “schedule” for that particular stretch of trail. But, some days we hike an extra six miles up two big climbs to make for a 20+ mile day total and feel pretty pleased with ourselves. The particular day I’m referring to is when we crossed Roan Mountain, the three balds following, Little Hump Mountain, and Hump Mountain. 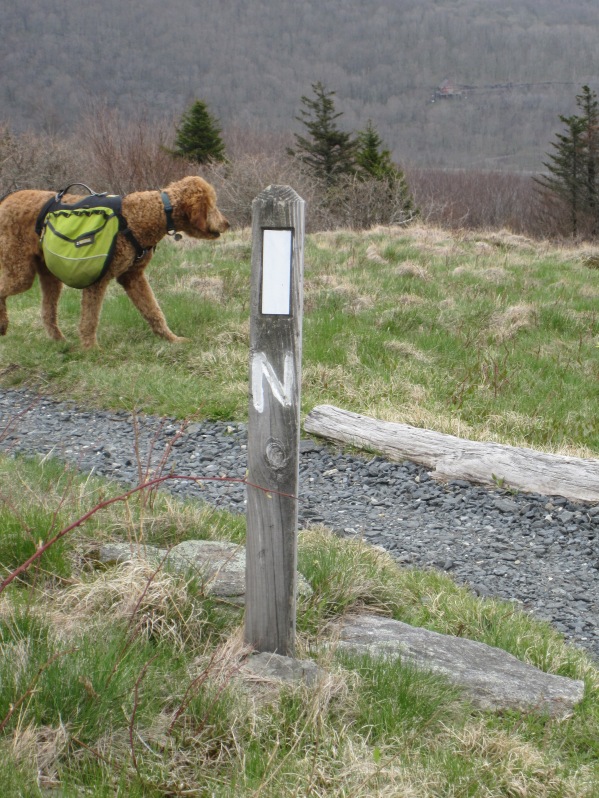 All six peaks reached a few hundred feet above or below the 6,000 foot elevation mark and all but Roan Mountain were exposed to the harsh winds of the day. Once we reached Doll Flats, our campsite for the night (and the point on the trail where we cross the North Carolina/Tennessee border one last time), we were happy to have it behind us as bad weather moved in overnight.

With two states officially behind us we had to stop and recognize the feat we’ve accomplished. Two states may not seem like much when looking at the big picture (the AT runs through 14 states total), but it is two more states down than when we began this journey. Just a small stretch of Tennessee remained and we began to mentally prepare ourselves for Virginia; the state that encompasses the most mileage of any on the Appalachian Trail. 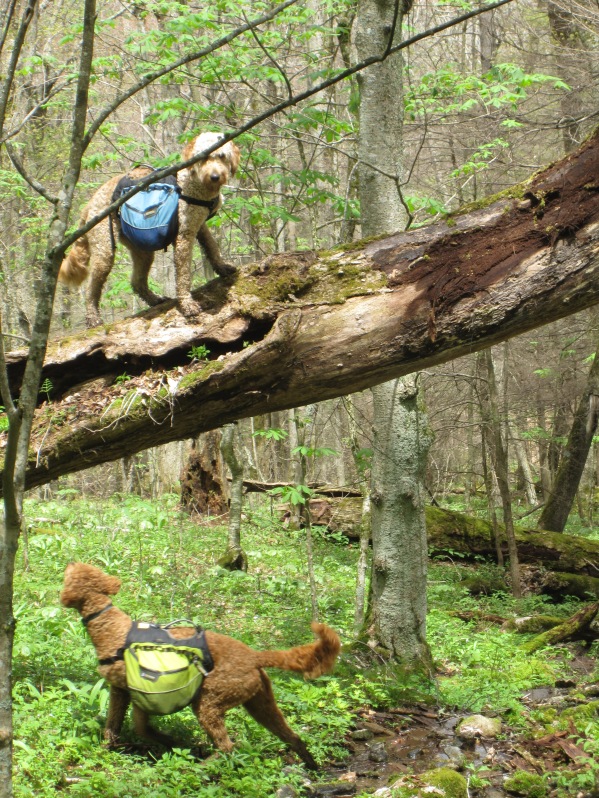