Home » Uncategorized » Damascus and Back Again

After our rainy welcome into Damascus, VA accompanied by Craig and Gracie, we headed home with them for the weekend. Lori came and picked up us drenched hikers and we told her all about our adventure on the short drive back to Glade Spring, VA. Brent and I were so grateful to be headed towards a hot shower instead of crawling into a wet tent that night.

We spent a couple of days at the “Hammond Inn” (as us returning guests like to call it) then the trail was called us back. We returned to Damascus where we left off, the four of us officially crossing under the town’s signature trail welcome sign. Still having the town to walk through, the trail following the sidewalk and streets from end to end, we took our time returning to the woods. The town was preparing for Trail Days, scheduled for that following weekend. We knew we’d be back for it, along with thousands of others, so we enjoyed the calm before the chaos. All our pits stops were equally necessary; fuel canister purchase at the outfitters, and an ice cream cone from a local shop before getting on the trail. 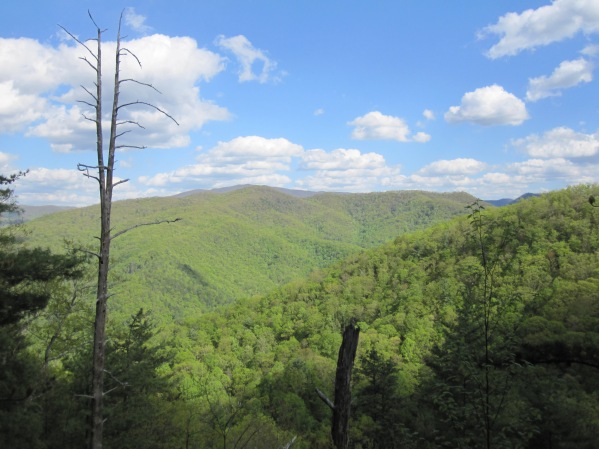 The type of country we saw north of Damascus was beautiful. Whitetop Mountain, Mount Rogers, and Grayson Highlands were among the highlights. My birthday came on a perfectly clear day when we planned on hiking up Whitetop Mountain. I got spoiled with breakfast in tent from Brent, and we broke down camp at a leisurely pace. That day, May 14th, is still the best weather day we’ve had yet. That helped, because our climb was a bit more strenuous than anticipated. Brent was a little antsy to get to the top, but cautious not to rush me on my day. When we arrived to the clearing near the top I soon discovered why, as Brent pulled a big bag out from behind Buzzard Rock.

When one spends day after day in the woods, sights like a large bag that isn’t our packs is enough to equal parts confuse and excite a hiker. He placed the bag in front of me to examine, and I quickly learned it was filled with goodies. Specifically, Birthday goodies he had arranged with Craig and Lori to be brought to the trail, all without my knowledge. I skipped over any credit he may have deserved and instead was in disbelief that they took the time to pick up and deliver these wonderful treats. We inhaled a feast of Big Mac’s, fries, sweet tea, birthday cake, red wine, and all the ingredients for some s’more making.

Between turning the big 2-5, the ideal weather, clear views for miles, and our rare on trail food coma it is sure to remain one of the most magical memories of our thru-hike. Mount Rogers, Virginia’s highest elevation point, was next and unfortunately was overshadowed by the excitement of entering Grayson Highlands State Park just ahead. Wild ponies roam throughout the park and we were a little nervous to see how Jack & Lewis would interact with them. These ponies are not bashful and accustomed to hikers passing through. Silly us, thinking our pups would spook them – instead they did quite opposite and sparked their interest. The first one we encountered trotted up to Lewis like he was a distant relative he hadn’t seen in awhile, eager to say hello. Dog and pony went nose to nose until Lewis snapped, realizing he was not related to this hoofed creature with a long face and mane. We caught it on video and we hope to share it with our followers when have the resources. Despite all the excitement, we were thankful no ponies or puppies were injured durning our visit to Grayson Highlands State Park. 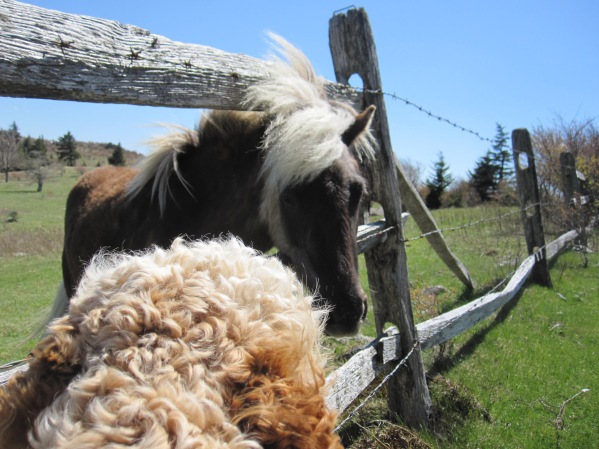 After we completed that popular stretch of the AT it was nearly time for Trail Days Festival, taking place back in Damascus, VA. Our guide book called it the largest event on the Appalachian Trail and us Midwesterners figured we better attend while we were this close. Craig came to pick us up at Dickey Gap, about 60 miles north of Damascus by trail. Many of this years attempting thru-hikers (AT class of 2013) had hiked past and then hitched back for the festivities. The other thousands in attendance were a mix of former thru-hiking alumni, section hikers, gear reps, locals, church groups, and basically anyone who has a desire to have a good time with a bunch of smelly hikers. A veterinarian was doing free check ups for trail dogs Friday morning and we made sure to pay him a visit. He reassured us they were in great shape and told us that dogs hiking the trail are usually the healthiest and happiest dogs he sees in his line of work. Ours in particular have age on their side – being just over a year old and overflowing with energy. But, as we’ve been told many a times, the percentage of completion for dogs attempting a thru-hike is far less than the 25% success rate for human attempts. As frustrated as they make us some days, we’re grateful for each and every mile they complete with ease and happy to have them along. The vet sent us on our way with reminders to keep them well hydrated, take care of their paws, and monitor them extra closely in the heat that would fill our days ahead.

We only stuck around Trail Days that Friday. That was enough time to catch up with other hikers we had met earlier in the trail, get free haircuts, fill up on free food, and visit the gear reps. We left with a brand new Therm-A-Rest air mattress we’d traded our defected one for, refreshing hair cuts, and the motivation from so many other hikers to keep pressing on. The remainder of the weekend we stayed back at the “Hammond Inn”, missing the parade and the unfortunate situation that arose in the midst. For those of you that didn’t catch it, an elderly man plowed into spectators during the parade on Saturday. The shocking story of people being pinned under the car and injuring many made national news. Last we heard it was a medical condition that caused the driver to lose control, and all hospitalized were released and recovering. Overall, it was shock to the crowds of people in attendance but all seemed grateful it wasn’t the worst outcome it could have been.

It ended up being a nice weekend to be off the trail. Thunderstorms and plenty of rain moved through the area and we didn’t end up returning to Dickey Gap until Monday afternoon. When we did return we hiked the 14 miles to Partnership Shelter in no time and set up tent. The shelter has amenities like showers and a sink in it, and is a popular stop because hikers can get pizza delivered to the trail there, it’s location being just off a road. We knew we were coming off of being spoiled by the Hammonds when we opted not to order a pizza for dinner. We have been so lucky to have their help and been able to enjoy their hospitality and company through Southern Virginia and even before. It made it a little bittersweet to be continuing down the trail. We continued further into Virginia knowing there is always a visit to Craig, Lori, Gracie, Charley Ann, and the rest the family in our future! 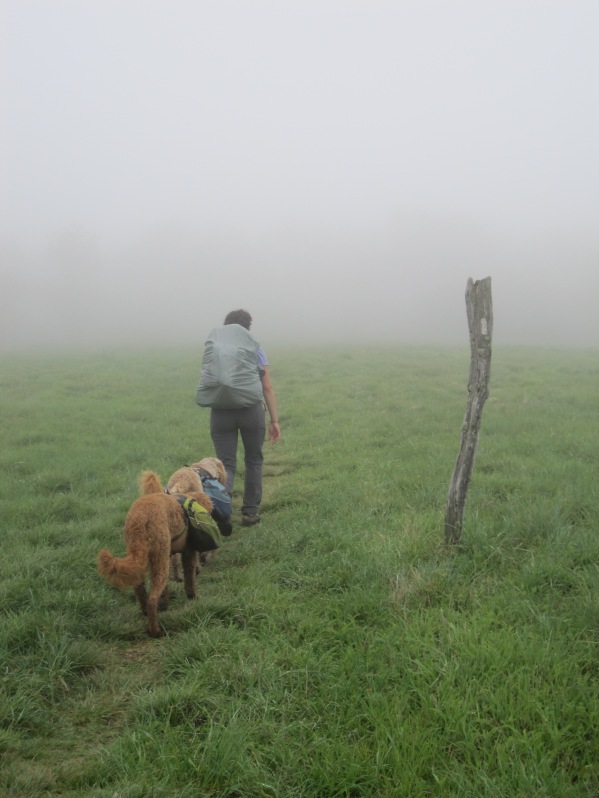 3 thoughts on “Damascus and Back Again”