After sixty some days on the trail we finally had our first bear sighting! It was yesterday morning around 9 am, about 20 miles north of Pearisburg, VA. Our pups, Jack & Lewis were leading us down the trail that morning when both started acting strange. Stopping in their tracks and spooking at the break of a twig we were getting frustrated with the inconsistent pace they were setting. I went to take the lead and sure enough, spotted two little round ears of a black bear sticking out over the shrubs only 20 yards up the trail. I turned back to Brent and mouthed the word “BEAR” as quietly and calmly as I could, gesturing to get the pups on leashes ASAP! As we did the bear must have finally spooked and we heard it scurry downhill. We continued downhill, pretty certain no bear cubs were present, but still proceeding with caution. What came next was a switchback in the trail, leading us right back to where the bear had gone. As we crept further down trail we heard more clumsy rustling in the shrubs, and there it was again, this time above us, just a big black mass watching as we continued on with our hike. No bear spray used, no lives threatened, and none of our food was eaten. Exactly the type of bear encounter we want to experience on the trail! If only we had the photo to prove it, but our hands were a bit busy with a tight grip on our dogs leashes. Instead, here’s a photo of the view where we’re posting from today! 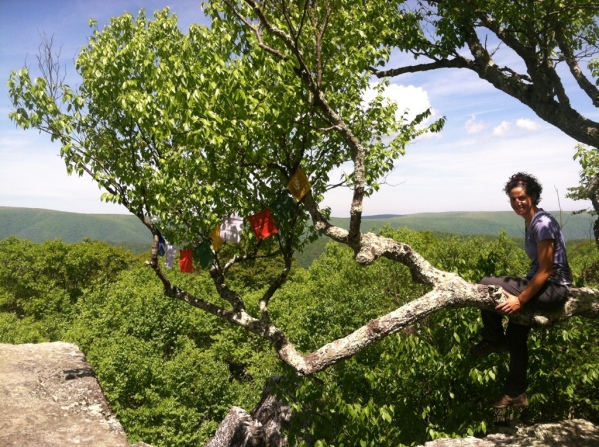